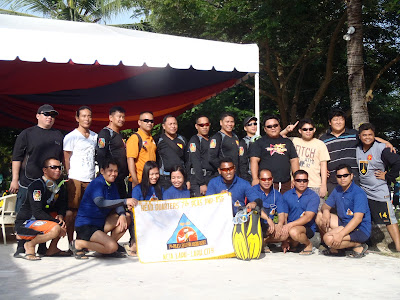 As we prepared for the Earth Day celebration last April 22, 2011, we also looked into how much impact we have made on the environment. Approximately 71 percent of the Earth`s surface is covered by the ocean. But over the years our relentless drive for advancement has caused too much stress on the Earth´s underwater habitat. Just recently, a study was done and it turned out that 75 percent of the world`s coral reefs are being threatened by these local and global pressures. Leaving those species whose well being and existence relies solely on the ocean, greatly affected. 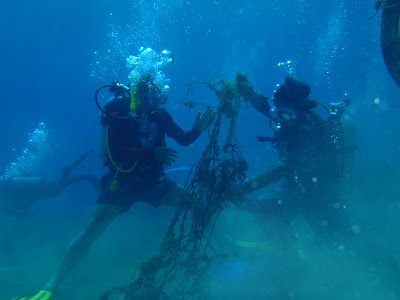 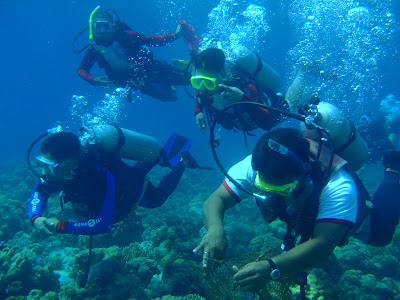 For this year's Earth Day celebration, Seven Seas Dive Center, Kontiki Divers Scuba Adventures together with Plantation Bay and 60 divers from the Philippine Navy, PNP, and Airforce joined forces but this time on a different battlefield- The Underwater world. The effort to combat underwater pollution creates a new challenge for these people who spent almost half of their lives to help in keeping our country in peace and order. Now, they cross to a peaceful environment in need of help.The action was headed by Dive Masters; Dario of Seven Seas Dive CenterandRex ofKontiki Divers Scuba Adventuresand P01 Vicente Pio of PNP Information Department. 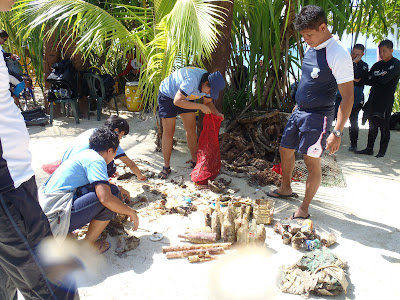 It was a whole day event done on the Plantation Bay house reef where they were able to collect bottles, fish traps, nets and plastics. These are the debris that causes marine mammals to suffer and eventually die. An estimated 100,000 marine mammals and sea turtles choke or get tangled by these types of marine debris every year. And 86 percent of all those affected are sea turtles.
“Education and awareness  plays a big role in making this effort to combat against marine debris effective. People need to be taught and be made aware of the consequences to whatever actions they do to our planet, especially the Ocean.  - Rex (Dive Master). 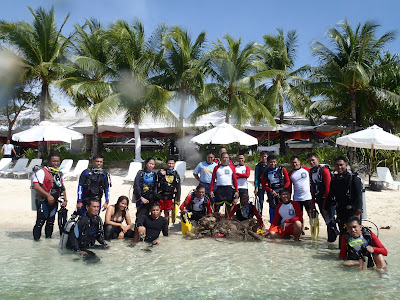 Seven Seas Dive Center and Kontiki Divers Scuba Adventures have been working hand in hand with the local government and other NGOs in this annual beach clean-up activity to help provide action and awareness not only to the locals but the foreign tourists as well.
The day ended with a feeling of accomplishment that somehow we were able to take part of this worldwide effort to bring about change and have a reason to celebrate this year´s Earth Day.
Posted by Kontiki Divers at 11:41 PM

Kontiki Divers
Cebu, Philippines
Kontiki Divers is a PADI Dive Center and TecRec Center. We offer recreational and technical PADI courses and TDI courses. Beside courses we offer fun diving for certified divers on Mactan Island and Day Trips to nearby islands of Cebu. For non-divers we offer island hopping and snorkeling trips and Discover Scuba Diving experiences for those who like to try diving.